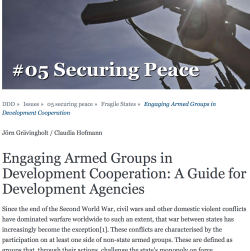 Since the end of the Second World War, civil wars and other domestic violent conflicts have dominated warfare worldwide to such an extent, that war between states has increasingly become the exception. These conflicts are characterised by the participation on at least one side of non-state armed groups. These are defined as groups that, through their actions, challenge the state’s monopoly on force.

Consequently, the debate on the role of and engagement with such armed groups has become increasingly relevant to development policy. Development agencies have continually increased their involvement in areas that range from combating poverty as a root cause of conflict to directly strengthening the civil components of conflict prevention, peace building and post-conflict reconstruction. Even where aid agencies do not directly address violent conflicts, they often find it hard to avoid their fallout.